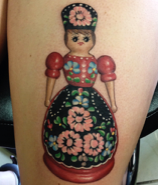 She was used to being alone. Literally alone; not "lonely." So, on a rainy October night, while waiting for her friends to arrive at a local establishment for a party, she went to the bar and ordered a cocktail.

"Since you already have a drink, may I at least have this dance?" he charmed.

Clown-face was a great dancer. Dressed as a thief herself, my girl was feeling rather adventurous and flirty—confident her dancing skills were also legit that night. Even if not, who was there to judge? A room full of masks and wigs?

Upon better-late-than-never late arrivals of her friends, the two characters exchanged numbers, promising to meet up on a 'regular' night. What happened next, sans face paint, was also pretty regular: he wasn’t too funny after all, and he never asked her to dance again. They went their separate circuses.

Some gatherings are a frothy mix of natural and artificial ingredients, tied together like two people much alike; however,

in fact, don’t get along regularly. The drink sips sweet, at first, but leaves you thirsty

by end of night. This is ‘punch,’ my friend.

Then there are some get-togethers so liquid smooth, they are solid, like silk

or bourbon. You may not order them up often,

but when you do, outpouring of tenderness—close your eyes,

inhale, let out a deep sigh. This is ‘old fashioned,’ my friend.

Such as a good wine, allow each RSVP some rest before committing;

at long last. In other words,

As for me, I was on a first date with a man who swore himself an anti-patriarch, but in the same sentence, stated he doesn't believe women should wear makeup—said it makes women look like clowns.

There I sat, sipping coffee with freshly coated guava-colored lips and mascara eyes, looking onward at a grown man rapping an original beat about "forbidding foundation 'cross the nation'."  (Suddenly, I wondered if he had even seen my profile photos?)

Is not the whole idea of going against patriarchal norms allowing a woman to decide what to do with her face?  As someone blessed with a redder-than-usual complexion myself, it's nice having non-surgical alternatives to neutralize my look. I'll always remember how happy I felt when I first discovered makeup as a pre-teen!

At the end of the day, Halloween or not, it's sometimes hard to decipher a person from their costume. However, after a few months, if you pay close attention, others begin to show their true colors. (It's inevitable.) When they do, all you have to do is ask yourself: Am I jumping through hoops? If the answer is yes, and you're trying to appease someone, especially at your own expense, you may need to look in the mirror. The real clown may be you.

On the bright side: you can change up your act.

Caryl Cunningham is a tattoo artist from Metro Detroit. She studied at College for Creative Studies (CCS), majoring in Painting and Sculpture, while also taking courses in jewelry and printmaking. Caryl's interest in tattoo artistry peaked after she spent some time doing Henna at a Yoga center.

"Tattoos are very personal for the wearer," states Cunningham, "whether decorative or highly symbolic and spiritual. I feel very privileged to be able to create a piece of living art for each client." The wearer of her featured image, 'Russian doll,' is Anne.

On wheeling and dealing